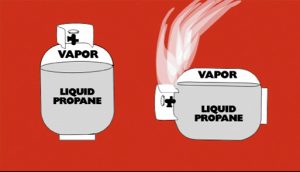 Liquid propane is highly volatile. It vaporizes instantly at a rate of about 270 to 1.) Put another way; if one cup of liquid propane is released, it instantly becomes 270 cups of pure propane vapor. Mixed with oxygen, it forms a combustible fuel which can readily be ignited by such ordinary sources as a cigarette or a spark from an electrical connection in your automobile. Unfortunately there have been many serious personal injury accidents over the years.