Cranford, NJ – Heating oil consumers begin the winter 2015-2016 in an advantageous position. According to the Energy Information Administration, prices are 56% lower than they were two years ago, 30% lower than they were a year ago, and are forecast to be lower by this amount throughout the entire winter.

DeGesero continued, “Not only are prices lower at the beginning of this heating season than they have been since 2006, but the product itself has dramatically improved. The sulfur content of heating oil has been reduced by three-quarters since then and will decrease again next year by an astounding ninety-seven percent from today’s baseline. This decrease is beneficial not only for air quality, but for system performance as well. Additionally, much of the heating oil sold today includes a blend of biodiesel, a renewable fuel that reduces heating oil’s carbon intensity dramatically.”

The two primary factors for reduced prices are the increase in domestic production and the increase in product inventory which has resulted.  The United States is now the world’s leading petroleum producer. In 2014 production was 35% higher than 2012 and through the first seven months of 2015 there was an increase of 12% over 2014. Distillate inventories (heating oil and diesel fuel) are 19% higher than they were a year ago.”

While some have speculated that the recent reduction in oil prices will result in decreasing U.S. production and be followed by an increase in prices that is not the consensus of all. According to an October 25, 2015 New York Times story:

“…many analysts predict that oil prices…will stay low for an unusually long period, as the industry slowly works off a huge glut of supplies and inventories.”

DeGesero concluded, “Lower prices aren’t the only way in which a homeowner can lower their heating costs. A properly maintained heating system can save from 5% to 10% and upgrading an older heating system to a new high-efficiency system may save 30% and even more in some cases. 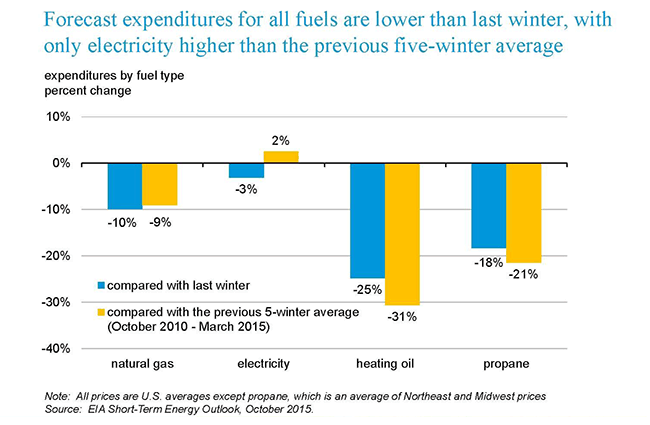