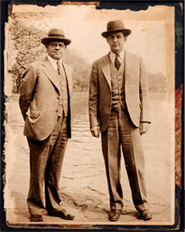 Herbert and Norman W. Woolley Sr., immigrated to New Jersey from New York. They wanted to start a coal company, much like their father’s. Herb was twenty-four years old and Norman only seventeen. They were looking for an area that was young and growing.What they found was Maplewood. It was a small town, and they believed it had potential. They found a spacious site on Burnett Avenue where the Woolley Coal Company opened its doors, providing coal, ice and wood to local homeowners. The boys had found their niche. Herb kept the books, while Norman worked with the customers. Their father Nephi Woolley- although busy with his own business – came out to help run the business. Soon he didn’t need to, in their first year their “fleet” of delivery wagons grew to seven. 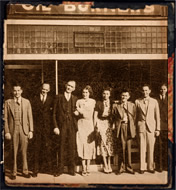 When the Depression hit, local businesses pulled together and figured out ways to keep working. Herb , and Norman used their horses to help dig out cellars for homes being built. They extended credit to families who needed it and in return their customers responded with an unfailing consumer loyalty. In the 1930’s, the latest heating technology was the automatic-feed coal furnace, called a “stoker”. Coal deliveries were made by horse drawn wagons. In the winter, the horses were hitched to sleds. If the cellar was out of the wagon chute’s reach, the delivery man had to carry 100-pound bags of coal into the cellar. Herb and Norman’s first oil truck delivered fuel by gravity; if the fill was uphill from the truck or the tank was upstairs, they hand carried the oil in 5 gallon cans.

By the end of World War II, the company had more than doubled in size, and the name was changed to the Woolley Fuel Company. The company was one of the first to fully computerize to insure faster, more accurate delivery, service and billing. Norm’s son, Norman W. Woolley Jr. joined his Dad and uncle in 1954; and in the 1990’s, Norman  E. Woolley the fourth generation entered the family business. In 2000 Woolley Fuel Company installed a state of art propane refilling station to fill barbecue grill tanks and commercial propane tanks. In 2005 the company acquired A.D. Runyon located in Millington, NJ and expanded the business into Somerset and Hunterdon County.  In 2008 Woolley Fuel Company became the first Diesel Station in New Jersey to carry Biodiesel. In 2011 Woolley Fuel Company acquired C.T. Williams and Son Plumbing to further expand it’s offerings to include top quality plumbing help which included servicing and installing natural gas. As the company continued to grow and expand its services the name was changed in 2015 to Woolley Home Solutions. Originally specializing in coal and ice delivery, Woolley Home Solutions evolved into a fuel oil and heating business before adding total home comfort to its service line. Today we can offer our customers a one-stop-shop access to a whole-house approach to improving energy efficiency and comfort. The oldest business in Maplewood, Woolley Home Solutions continues to offer personal service to its customers.